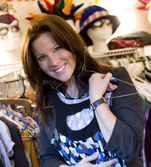 When this former bungee-trapeze performer plunged into entrepreneurship, she entered unfamiliar territory.  A Quebecer who had been seduced by the Cirque du Soleil at an early age, Anaïs opened her school of circus arts in 2002 in a province and a language that were both new to her.  Although her specialty was relatively unknown to Atlantic Canadians, it didn’t take long for the local population to be captivated by this unique art form.

Today, Atlantic Cirque offers classes to over 175 weekly participants, aged three and up, and has expanded to offer summer and spring break camps, workshops, birthday parties, professional development and corporate team building programs.  In addition, the company’s artist agency has been providing entertainment since 2002 and now represents 20+ professional artists and over 50 acts to choose from!